END_OF_DOCUMENT_TOKEN_TO_BE_REPLACED

A new wallpaper fresh from yesterday. Shot at the annual outing of Club Photo Boisbriand. 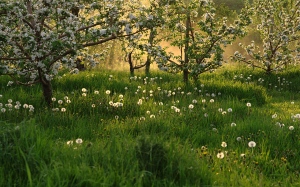 Not Loosing the Perspective

My first true computer, a TI 99/4a (which I talk about also in a previous entry), had 16 or 48 KB of RAM, depending whether or not you had one of the memory expansion cartridges, and that limited quantity of memory severely curbed the complexity of the programs one could write on the machine. However, the limited complexity of the programs, the relative crudeness of the development environment (a BASIC shell) and the slow execution speeds weren’t very obvious to me back then. They were somewhat mitigated by the novelty of the computer itself as a machine, and by the perpetual intense excitement of discovery. The arduous design of programs to save memory, fit more graphics or more code, or even getting our programs to work at all was less about constraints than challenge.

The same kind of constraints—or challenge—followed me over the years as I moved on to different computers. Despite their being more powerful, both faster and sporting more memory, the challenge remained there because while the computers got better, so did I at programming. I kept asking more out of the machine, writing increasingly complex programs needing either more memory or more speed, often both. That meant better algorithms, better data structures, and better implementations1.

END_OF_DOCUMENT_TOKEN_TO_BE_REPLACED

You are given the following assignment:

You are to write a program that must fulfill these simple requirements:

Can you code that and get it right in less than one minute? In less than two? How many retries will be necessary? Open your favorite editor for your favorite programming language. Ready? Set? Go!

END_OF_DOCUMENT_TOKEN_TO_BE_REPLACED

This is not an ordinary textbook as it does not follow the expected pattern but is rather an extensive survey of the field of genetic programming. Each chapter introduces a major concept or issue in genetic programming and covers the subject in a rather authoritative way, supported by copious documentation—the last 57 pages of the books are occupied by the bibliography.

END_OF_DOCUMENT_TOKEN_TO_BE_REPLACED

Suggested Reading: An Introduction to Genetic Programming for Scientists and Engineers

Suggested Reading: The Trouble With Physics

In this book, the physicist Lee Smolin tries to explains us in what kind of predicament modern physics is today. He starts by enumerating the five great questions that modern physics must answer: