In previous posts, I’ve looked into unit fractions, also known as “Egyptian fractions”, fractions where the numerator is

, some integer. We have noticed that finding good representation for a fraction

as a sum of unit fraction is not as trivial as it may first seem. Indeed, we noticed that the greedy algorithm, the one that always pick the largest unitary fraction that does not exceed the rest as the next term, may lead to long series of unit fractions, sometimes with large denominators, even for simple fraction. For example,

in an “easy way”, which was often better than the greedy algorithm. Surely, we can do better, but how?

What about depth- or breath-first exhaustive search? Will that do much better? And what should we measure exactly? Lengths of the decompositions? Largest denominators? Sure, both!

So let’s recapitulate the three methods:

Note that here, the greedy method is limited to machine precision, or basically one part by billion. If the fraction is “close enough”, the greedy method stops and gives a good approximation. The error for $\latex 5/121$, the example give above, is

. That’s “close enough”. The two other methods go on until they reach a remainder of zero. 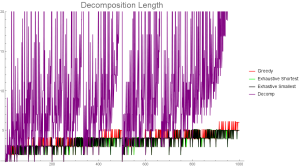 The second criterion is maybe more interesting: the smallest largest denominator in the decomposition. Certainly for pen-and-paper calculations, the smaller are the numbers involved, the better. 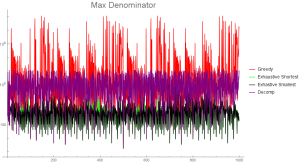 So, in addition of the fun of exploring “Egyptian” fractions, are they of any use?

If you take a “modernist” approach, approximating, or expressing exactly, an arbitrary fraction by a sum of unit fractions is pretty pointless. Indeed, it doesn’t make much of a difference for the CPU to compute

. Unless, of course, the CPU is really under-powered, it may be better to just divide by small denominators and compute the sum. I think it’s unlikely, however.

The use I can see, is when you’re trying to figure out the asymptotic behavior of some function. It may be more interesting to work with

than to work with

This entry was posted on Tuesday, October 11th, 2016 at 17:31 pm and is filed under algorithms, Mathematics. You can follow any responses to this entry through the RSS 2.0 feed. You can leave a response, or trackback from your own site.